One of our volunteers in Ramsgate (Natasha Bizarra) was alerted to a kitten that had fallen down a flight of stairs. The kitten is approximately 7 weeks old. The kitten was owned by a lovely family but they had no idea what they could do to help as the kitten was laying at the bottom of the stairs, breathing but not moving.

Natasha Bizarra asked if the owners would be happy to sign over the kittens care to us and they did immediately. So she raced over there and called HQ to sort a plan of action. Natasha and her friend drove from Ramsgate to our vets in Gillingham to see what could be done about this baby. 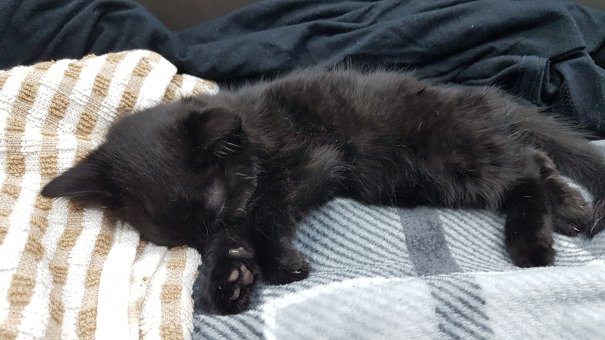 The kittens temperature is extremely high and xrays haven’t shown anything broken. However, we don’t know what’s going on inside her and we believe she has sustained a brain injury or severe concussion, so for now she is in a vegitative state being monitored by the vets for the moment.

Update, after numerous vet visits Beemo started to stand up, walk in circles, feel her toes and face. She would react to sounds and was pooing and weeing by herself. After 3 weeks of 2 hourly care day and night she gave up this morning and decided to cross rainbow bridge to play in the sun (Wednesday 16th May)

Rest in paws heaven beautiful princess, we tried so very hard for you xxxx